An Introduction to Ruby classes and objects

When you start learning Ruby, you often hear that everything is - or evaluates as - an object. And you’re usually like “🤔 Come again”?

Objects are the main paradigm in defining Ruby as a language. Objects and classes serve as blueprint. But when objects are defined by other objects, the recursion can seem a tad difficult to grasp at first.

So, here’s an introduction to objects and classes in Ruby for my fellow Ruby developers out there.

What is an object?

An object is a piece - any piece - of data (regardless of the language you're using). That's it.

Some types of data:

But 1 and 5 are both integers, so Ruby assign them the same class - the Integer class.

The Integer class holds a specific set of methods every integer can call. Developers can then expect common patterns for different objects described by the same class.

Let’s call the method .class on some objects to check their Ruby class.

Classes act as blueprints: you define which data they need and what they can do with it. Then, you can create as many instances - think of instances as casts shaped from a mold - from the same blueprint.

Let’s create a blueprint for babies. Here’s what our Baby class needs:

Here, I now have a blueprint for babies. It’s pretty limited but here’s what it does:

A baby is an “object” whose information and behaviors are specified by a class. Different babies are different “objects” but they all share the same set of basic capabilities. 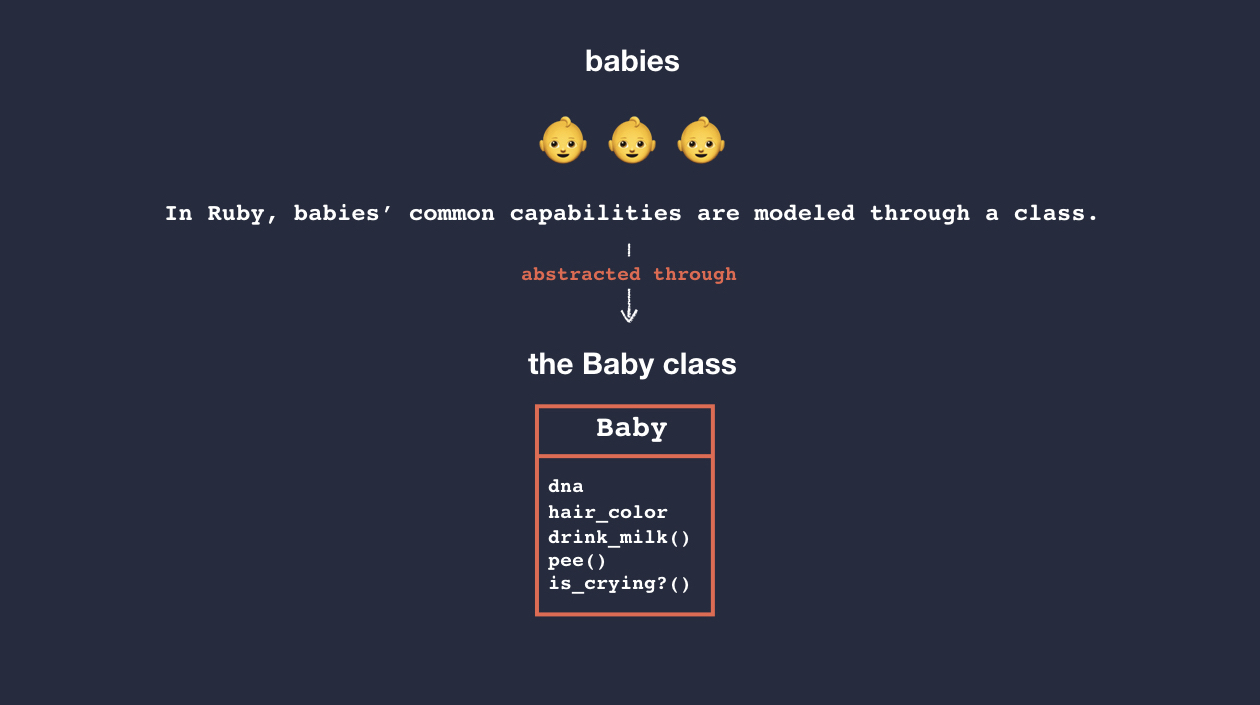 So far, we have objects categorized by classes and, whose common information types and behaviors are defined by methods.

Objects as Object (a.k.a, the mindfuck)

Yes, I know, it seems like I’m in for the tautology of the year. And yet, different objects can have common behaviors too!

Let’s take an example with the method inspect which returns a human-readable representation of the object. We’ll make a new baby 1 and print her information in my console.

To find out and pull on the thread, let’s get back to our console.

Forget about Ruby and web development for a second. Consider this main object as the mother of all objects. Every object is unique, yet they all share common patterns. For instance, they can be inspected, analyzed, etc. You can inspect integers, trees, strings, and babies all the same. Nothing stops you to submit any object to your scrutiny.

Well, that’s the same in Ruby. Any object can be inspected. It’s a common behavior shared by all objects. And this behavior is defined in the Object class with the method #inspect as you can see in the third line of the console screen above.

Object is the default root of all Ruby objects. [...] Methods on Object are available to all classes unless explicitly overridden. The Ruby doc

It allows Ruby to define methods at appropriate levels of abstraction. 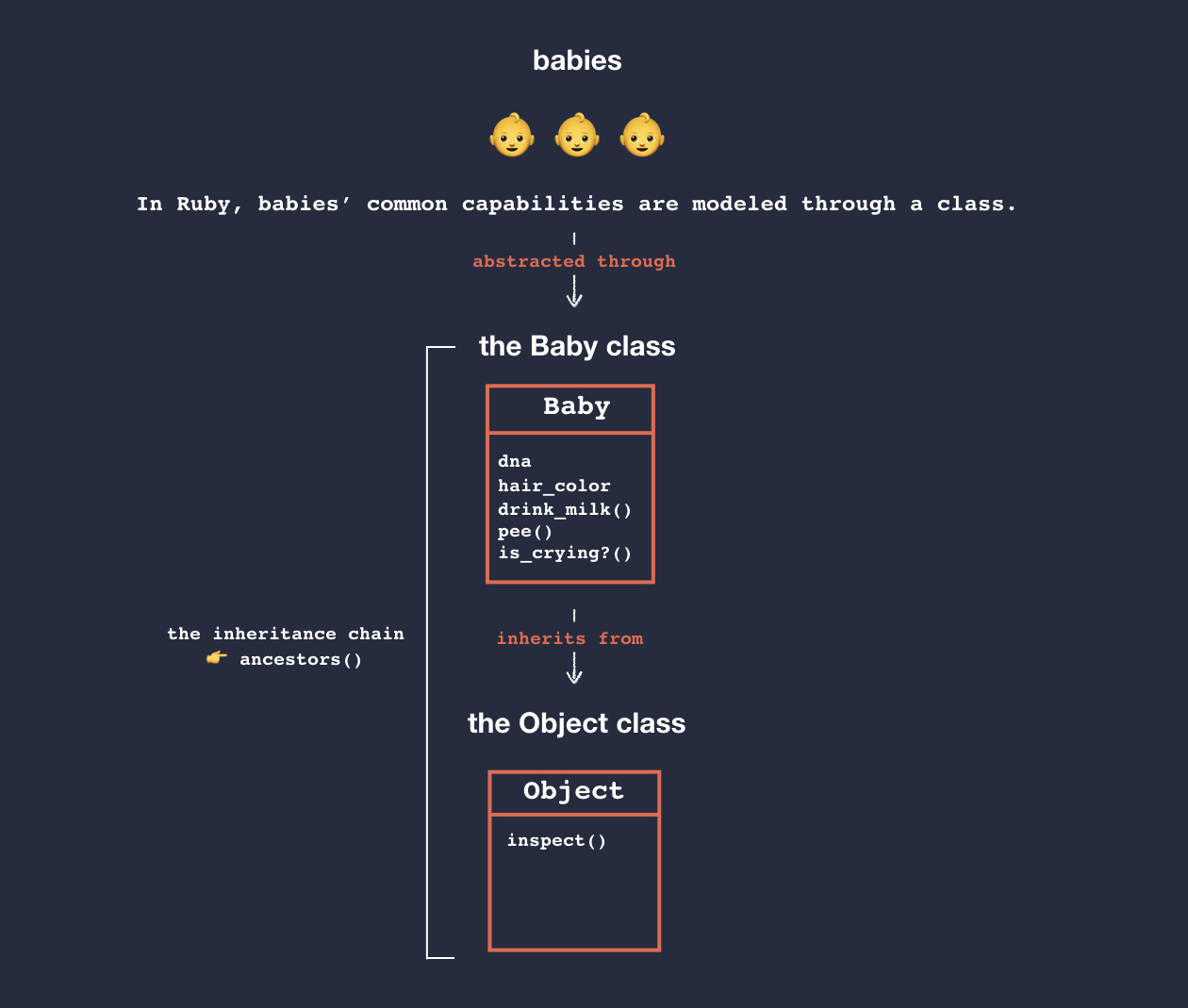 You can dig deeper and check the full inheritance chain by running Object.ancestors in your console. For those who want the TL;DR, Object inherits from BasicObject and mixes in Kernel’s methods (like the p method, we junior developers use everywhere to debug our code).

Objects are pieces of data. Different objects can relate to the same class. Classes receive and handle data in their specific way. All classes inherit from the `Object` class and its methods.

Haven’t lost you yet, have I? Good! Then, let’s talk about the object that describes all classes: the class object and its Class class.

When you think about it, classes are nothing more than objects. If 'Hello there' is a string and 1 is an integer, String is a class (i.e. a blueprint). So as an object, Ruby has given it its own class: the Class class.

As an instance method of Class, #new is accessible by all instances of Class like our Baby class. 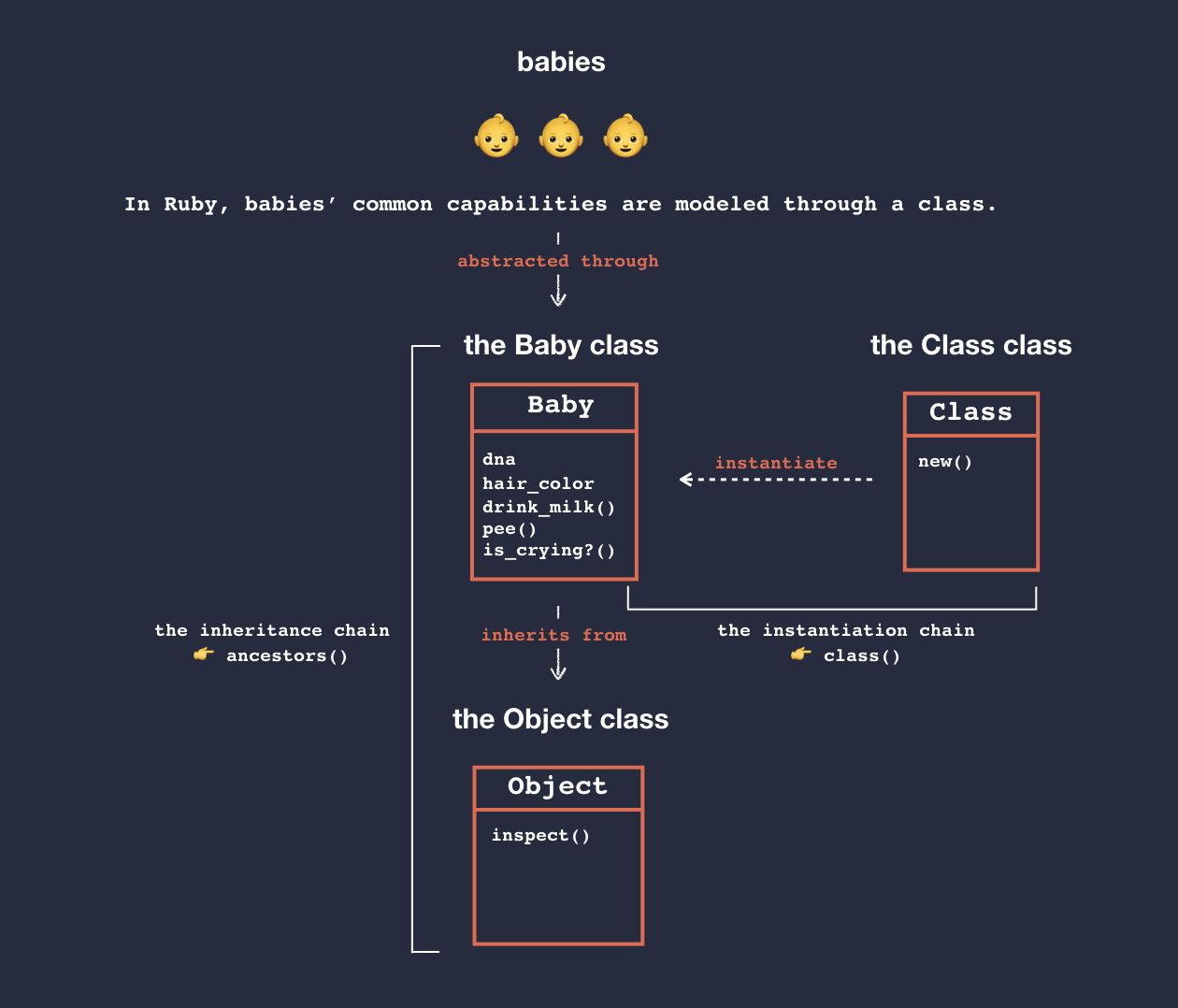 My Baby class does not have a #new method. And yet, I can create new babies with Baby.new(dna). It’s because all classes - String, Integer, Baby, etc - inherit from Class.

Let me show you how it works when you define a class in your code.

is the same as:

So if Baby and Class are both classes, they’re both instances of the Class class? Yep. Class.class returns Class. It’s recursive.

Let’s wrap up before letting you massage away that headache of yours:

Objects are pieces of data. Different objects can relate to the same class. Classes then receive and handle data in their specific way. All classes inherit from the `Object` class and its methods. Classes share common behaviors defined in the `Class` class.

I hope you enjoyed the ride as much as I did!

Keep in mind that this is only an introduction. There are many broad strokes and many (more or less voluntary) omissions on my part. If you enjoyed the topic, check out the rest of my essays on Ruby.

Many thanks to Nicolas and Sylvain for reading my drafts, asking a lot of questions, and making this introduction to objects and classes (much much) better.

Noticed something? Ping me on Twitter or create an issue on GitHub.